SNT… The main interface with all available commands with access to all viewers and canvases. Tracing and path editing operations are done from this interface.
Rec. Viewer A fast, streamlined interface for analysis of existing neuroanatomical data.
Reconstruction Plotter A utility command for quickly render reconstructions in vector format without having to load other interfaces.

The easiest way to access all of SNT commands is through the Neuroanatomy Shortcuts Window by pressing SNT in the ImageJ toolbar.

This manual was originally written for version 3.0. Some newer features may not be documented.
Please help us to keep this manual up-to-date by reaching out on forum.sc.

Lists commands for I/O operations. Most are self-explanatory. Noteworthy:

This home tab aggregated widgets for tracing and frequent operations.

Enable Snapping checkbox If active (the default) the cursor snaps to the brightest voxel in its vicinity (Toggling shortcut: S). To accomplish this, SNT takes the cuboid of the specified dimensions (in pixels) centered on the current cursor position and searches quickly for local maxima in that neighborhood, moving the cursor to that position. The Z-plane in which the maximum was found is automatically selected if the “Z” parameter is greater than 0. Noteworthy:

Experiment with different Adjusted max. values to find a setting which captures the structures you are interested in while taking care to avoid over or under-saturation. In the former case, the search might consider pixels outside of the tubular structures, giving a less accurate result. In the latter case, the search might take significantly longer, since each pixel will carry greater cost than is reasonable. It is usually safe to choose a value somewhere near the default. Once you have chosen this value, click on the square in the palette with the sigma that best fits your application (its border will turn green) then press “Apply”. The parameters will be transferred to the interface and a Gaussian convolution will be run over the image, which may take some time depending on its size. Once it’s done, pathfinding will occur on the Hessian (a.k.a. Tubeness) image.

Pressing OK will output a color-mapped image (based off local radius) and a histogram showing the distribution of radii across the image. To calibrate the Hessian analysis for smaller processes, one might select a sigma value closer to the minimum estimated thickness, or the opposite for larger processes.

Other options are also available in the gear drop-down menu:

This is one of SNT’s most advanced features. Hessian-based analysis provides a convenient and easy way to perform auto-tracing on pre-processed data in which voxels defining the traced structure are scored by their likelihood of belonging to a tube-like structure. However, it is just one approach for “tubeness” classification. What if your data requires different filtering?, or you want to experiment with other approaches?, or the perfect pre-processing algorithm for your images is not yet available in ImageJ? Tracing on Secondary Image is the answer to these questions: It allows you to feed SNT with pre-processed data on which the A*star search will operate. Here are two specific usages for this option:

Importantly, this option can be toggled at will, during tracing. Indeed, one can ping-pong between secondary image and main image simply, by pressing I, the shortcut for the Trace on Secondary Image checkbox.

Secondary Image options can be specified in the gear drop-down menu, including commands for Loading/displaying the image file and the powerful Generate Secondary Image command:

Filters for Visibility of Paths

By default, all the nodes of a path are projected onto the current Z-slice. This is useful to see how much has been completed and gives a sense of the overall structure of the reconstruction. However, SNT provides three additional visibility options for paths:

By default, finished paths are colored by their selection status (only selected paths can be edited, or extended). The default colors are Green (selected paths) and Magenta (deselected). Default colors can be customized by pressing the respective button in the widget and using the CMYK color model. For customizing unconfirmed and temporary paths, see the Colors option in the UI Interaction widget.

Enforce default colors (ignore color tags) If active, SNT will force all paths to conform to the default “Selected” and “Deselected” color buttons. Any custom color tags will be ignored until the option is toggled off. Note that this options does not apply to Rec. Viewer and SciView. 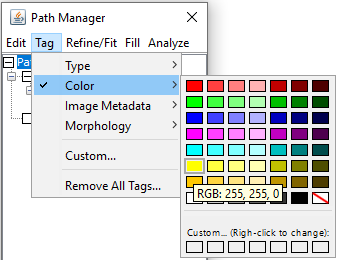 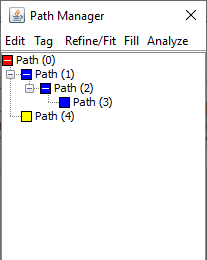 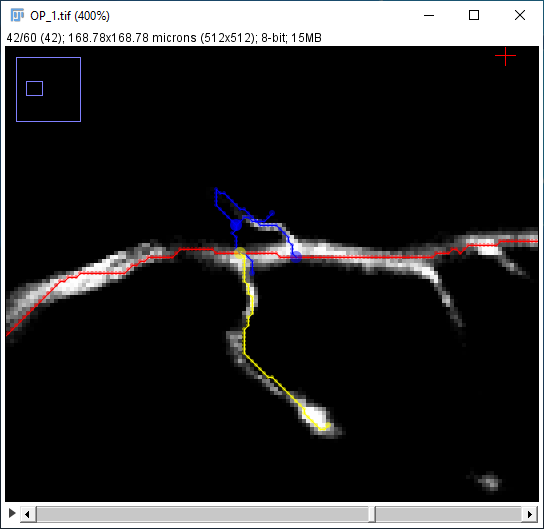 Note that Path Manager commands are applied to all paths if no paths are selected.

If tracing on a multi-dimensional image (i.e., one with multiple data channels and/or a time axis), a particular channel/frame can be loaded into the views by selecting each and pressing the “Reload” button.

sciview is IJ2’s modern replacement for the Legacy 3D Viewer, providing sophisticated 3D visualization and virtual reality capabilities for arbitrarily large image volumes and meshes. Since it is fully integrated with SNT, SciView can enhance tracing, analysis and visualization routines by providing a deeper, more contextualized view of the imagery at hand. Additionally, native integration with Cx3D enables simulation of neurodevelopmental processes, including neuronal growth and formation of cortical circuits. See SNT: Modeling for details.

The Legacy 3D Viewer is a functional tracing canvas but it depends on outdated services that are now deprecated. It may not function reliably on recent operating systems. For usage instructions, see Tracing using the Legacy 3D Viewer.

Right-clicking on any of the image views will bring up a menu with various editing tools. The corresponding keyboard shortcuts are shown to the right of each option.

Pressing Edit Path with a single path selected will activate Edit Mode, allowing use of the menu options under the Edit Path option. When Edit Mode is active, moving the mouse cursor along the path will activate the nearest node and synchronize the current Z-slice to the location of that node. Note that the ability to create new paths is temporarily disabled when in Edit Mode.

The Path Manager dialog displays all existing paths in a hierarchical structure (tree), where one path is “primary” (path 0) and all other paths (paths 1…N) are children of the primary path. The dialog also contains several menus with various editing, tagging, refinement/fitting, filling and analysis options. Paths can be searched by name and/or tags in the text filter, with more sophisticated search capabilities in the Advanced Filtering Menu.

Assigns tags to Paths. Tags are organized in the following categories:

Note that only SWC-type tags are preserved across restarts when saving traces in the SWC format. All others require data to be saved in SNT’s own .Traces format.

SNT can use the fluorescent signal around traced Paths to optimize curvatures and estimate the thickness of traced structures to sub-voxel accuracy. The optimization algorithm uses pixel intensities to fit circular cross-sections around each node. Once computed, fitted cross-sections can be used to: 1) Infer the radius of nodes, and/or 2) refine node positioning, by snapping their coordinates to the cross-section centroid. The Refine/Fit menu contains three entries:

Before computing the fit, SNT will prompt you to specify two parameters:

Assuming you chose to fit both centroids and radii, a fitted path might look like the rightmost image below. Notice how the nodes follow the center line of the structure more closely, and how each node now has a non-zero radius approximating that of the traced axon.

This menu contains several options which provide quick ways to analyze and visualize numerical properties of paths. Note that these operations are only applied to the subset of currently selected Path(s). To apply these operations to the entire Tree, deselect all Paths first.

The filter toolbar allows paths to be searched and filtered quickly using tags (colors, annotations, SWC-type, etc.) or morphometric properties. The text field is used for text-based searches (recent searches can be recovered through its drop-down menu). The ↓ Down and ↑ Up arrow keys find the next/previous occurrence of the entered phrase, while the

button highlights all occurrences of the entered phrase. Settings for advance text-based filtering can be accessed through the

button, including wildcard support, case sensitive matching, and replace-by-pattern. In addition, the

button restricts filtering to the selected subset of Path(s). Other means of filtering Paths include:

Provides controls for all filling operations. It is described in more detail in the Filling: Step-By-Step Instructions.