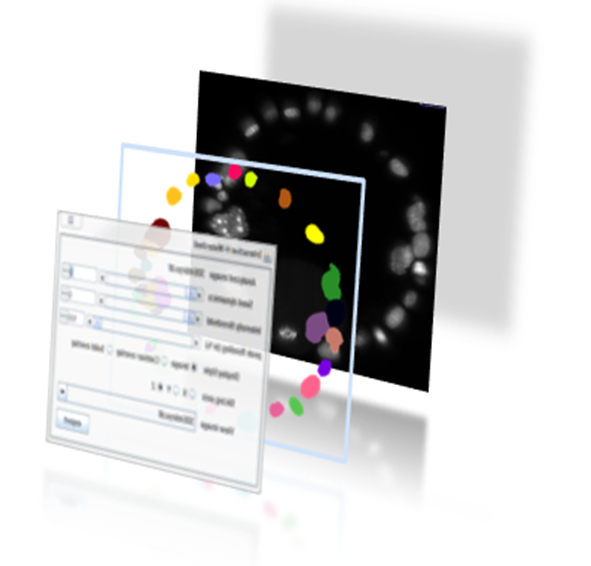 Watershed [Vincent 1991] is a common tool to segment objects in an 2D and 3D images. It is relatively fast and can provides understandable and robust results which can be used for image analysis.

Creating a good segmentation however requires some expertise and can be time consuming. One has to determine the right threshold to stop the watershed. Meaningful local extrema have to be selected to initiate the algorithm. And once a result is obtained the segmentation has to be compared to the original data. That process can then be iterated till satisfying parameters are found. That procedure can be very time consuming if not provided with practicle tools, especially when image are large and a single watershed can take minutes.

The interactive Watershed plugin provides an interactive way to explore local minima (maxima) and threshold, updating the resulting watershed on the fly. This is possible by calculating the watershed only once at plugin initialization. Further when Threshold or maxima selection are updated this initial segmentation is reused to generate the new segmentation instantly. In order to ease quality assessment the results directly overlaid to the data.

The 2 following subsection gives additional details on watershed working principle and on the strategy used in the plugin for local maxima detection: H-Maxima

If we interpret images as landscapes of hills and valleys, the watershed algorithm gradually flood the valleys starting from their lowest point (the image local minima). When the floodings of two minima meet at a sadle they remain distinct as each minima region is labelled with a distinct color. The flooding stops when all the image is covered. As objects do not always cover the whole image a threshold can be set to stop region the region flooding. Alternatively the flooding can be started from local maxima. Figure 2 shows the flooding of 3 peaks for different values of the treshold parameter.

An image local maximum (minimum) is a region in the image for which all neighboring pixels have a lower (higher) value. A lot of maxima in an image are simply caused by noise and are not meaningful. If one can select more significant maxima corresponding to objects, they could be used to initiate a watershed segmentation of these objects.

There exists many different ways of detecting local maxima. H-maxima focuses on maxima robustness. It has one parameter, H, that can be compared to the amplitude of the noise in the image. H-maxima selects all maxima which are still maxima when their value is decreased by H. When H is increased, less maxima are selected but they end being more robust to noise. Figure 3 shows the maxima selected in a sample image for different H values.

**Figure 3** illustrates the detection of H-Maxima in 2D, 1D and the resulting 2D watershed (repectively row 1, 2 and 3). The 1st column shows the original data, whereas column 2, 3 and 4 show the H-Maxima and H-Watershed respectively for H values 0, 10 and 40. The threshold value 100 was used for the H-Watershed on row 3. The image used for the illustration is a crop of the blobs image available from ImageJ sample images.

To install the plugin in your ImageJ or Fiji installation. Add the update site SCF-MPI-CBG. Java8 update site should also be installed if it is not there yet. The procedure to follow an update site can be found there.

Once the update site is installed, restart ImageJ. A new menu, SCF, should appear. The Interactive Watershed plugin can be found in the menu SCF>Labelling>Interactive H_Watershed.

To use the Interactive Watershed plugin.

The control panel items, see Figure 4, can be used to modify the segmentation and its visualization. Their usage are described in the rest of the section:

**Figure 4** shows the user interface of the Interactive Watershed plugin for 2D images (Left) and 3D images (Right). At the top of the panel, one can see the name of the analyzed image (Red). Below are parameters input, H value (Green), watershed threshold, T,(Blue) and peak Flooding (Orange). The control of segmentation display are: display style(Light purple) and the background image (Yellow). Finally the export button (Lilac) exports a label map corresponding to the current parameter H,T and peak flooding. User interface for 3D images also allows to select the slice orientation of the result window(Pink). Plane can be navigated directly with usual ImageJ controls.

**Figure 5** is illustrating segmentation display modes. The second row shows a close up (red region from the first row). The raw data (1st column) are segmented by the Interactive Watershed plugin and can be displayed as a label map (2nd column), regions contours overlay(column 3) and solid region overlay (column 4).

**Figure 6:** In 3D images a good assessment of segmentation requires to observe data in different orientation. Beside the usual XY view of the data (Left), the Interactive Watershed plugin can display YZ sections (Center panel, section along the red line) and XZ sections (Right panel, section along the green line). If the data are not istropic the views are resampled to remove distortion and make inspection effortless.

In ImageJ macro language one can perform a H-Watershed segmentation with the following command:

In a Jython script the H-Watershed segmentation could be called as follows:

The run commands are also recorded by the macro recorder when exporting a label map.

The plugin strategy is to do the heavy lifting once at the beginning and rely on it later on to keep segmentation update lightweight.

At initialization the plugin calculates the full watershed of the image (i.e. for all local maxima of the image). This initial segmentation is then organized in a bottom up fashion. The segments are gradually merged to form a hierarchy (or a tree if you prefer). First the segment whose maxima have the lowest dynamics (or lowest robustness, remember H-maxima) are merged. When 2 segments are merged their dynamics and the dynamics of the neighbor segments are reevaluated. This merging process is repeated until all the segments are merged. It generates a tree whose nodes corresponds to segments in the image. In particular, when going along a tree branch, from leafs to root, the dynamics of the nodes is always increasing.

As a result of this process we obtain a label map of the full watershed and a tree representing the merging of the regions in that label map.

Ligthweight update of the segmentation

When the H parameter is updated to a value \(h\). It means that the watershed should show only the segments which local maxima have a dynamics superior to \(h\). If we prune our full tree to remove all nodes with dynamics inferior to \(h\) the leaf of the pruned tree correspond to the segments we are looking for. We now need to recolor the label map of the full watershed to create a label map of the segmentation with \(h\)-maxima. This can be done by attributing a label to the leaf node of the pruned tree. This label is then propagated to the leaf nodes of the original tree. Finally, the segment of the full watershed can be recolored according to this new label. This whole process is quite efficient: the relabelling is a simple raster pass on the orignal label map and the tree number of nodes is a lot smaller than the number of pixel in the image.

When the T parameter is updated the maxima are not modified, thus it is only needed to go through the label map and check if the pixel value in the raw data is above or bellow the threshold. When the peak flooding parameter is changed the strategy is similar but each segment as a distinct threshold

The initial description, to the best of our knowledge of a watershed segment hierarchy using peak dynamics as a merging criteria was described in [Najman 1996]. The plugin initial watersheding is implemented after the IFT-watershed [Lotufo 2000]. The implementation was modified to build the segment tree on the fly. The plugin input and output are IJ1 imagePlus however the image processing inside the plugin relies on ImgLib2. A quick note on the segmentation update of 3D image, the plugin does not relabel the whole volume at every update but only the slice vizualized in order to preserve interactivity.

[Lotufo 2000] Lotufo, R., & Falcao, A. (2000). The Ordered Queue And The Optimality Of The Watershed Approaches. In In Mathematical Morphology and its Applications to Image and Signal Processing.