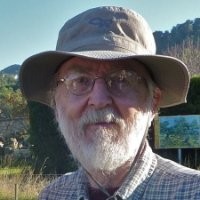 Wayne Rasband is a software developer who worked at the National Institutes of Health (NIH) for 40 years. He retired in 2010 but continues to work on ImageJ as an NIH volunteer. He fixes bugs, answers questions and adds features based on user feedback. Wayne also manages the ImageJ 1.x website and mailing list.

Rasband developed three image analysis programs while at the NIH. The first, from the late 70s, was called “Image”. It ran on PDP-11 minicomputers, was written in Pascal, and was used to analyze autoradiographs and 2D electrophoresis gels. It had many of the capabilities we now take for granted in ImageJ, such as regions of interest, contrast stretching, thresholding and color lookup tables. “Image” did all this on computers with only 64KB of memory (images were stored in a 512x512 frame buffer/display).

Rasband started work on NIH Image in 1987 when the Mac II was introduced, with the goal of creating a smaller, less expensive and more approachable imaging system. Unlike “Image”, NIH Image was widely used outside of the NIH and it benefited greatly from suggestions, bug fixes, code and documentation contributed by dozens of users.

ImageJ came to life in 1997 when Wayne started experimenting to see if he could recreate NIH Image in Java. Java was attractive because, in theory, he could develop a program on a Mac that would “run anywhere”. ImageJ has continuously improved over many years based on user feedback and the contributions of hundreds of users.