It is our please to announce the release of the version 2.8.0 of TrackMate, after a quieter pace of development.

This version ships mainly small utilities, improvement and bugfixes. But more importantly, I would like to highlight several contributed TrackMate modules since the last release.

Pardon the informal tone this developer announcement will take but Ah! the joy this part causes me! All of us that wrote documentation for an academic open-source project know this pain and doubt very well: Is spending an excruciating time redacting tutorials for others to use an API worth anything? Is there any good that will come of it? Will this ever reach anyone? I am doing this for naught?

Picture yourself at work, leaned over the keyboard, this Wiki edit page opened, pondering the best way to make your message on SciJava extension mechanism through. When your boss knock at the door and says “I hope you are not writing tutorials for TrackMate. There is still papers X and Y to write, project Z has a report coming, and N users waiting for you to train them.”

Picture yourself at home. It’s night. It’s cold. The kids approach the desk, full of expectations.

So of course we were thrilled when we saw the first 3rd party contributed TrackMate modules. We list the ones we are aware of. If you know others we missed, contact us directly to have this list updated.

The source code is found on his github page.

Thorsten Wagner is working on a detector that emulates the Find maxima tool of ImageJ. The module is not totally ready, but you can find a working fork of TrackMate here that ships the functionality.

Benoit Lombardo wrote a spot analyzer that compute mean intensities in all the channels of an image, when you have a multi-channel image. You can find it on the TrackMate extras page.

Since rather recently, the display of tracks on MacOSX and Linux platforms has become incredibly slow for a large number of tracks. I could not track the origin of the problem, that probably lies in the code of the JDK.

TrackMate permits semi-automated and curation of automated results. In some cases, there might be many spurious spots to remove manually. To make it less cumbersome, you can draw a ROI to select many spots at once. This is best explained in the following short video:

TrackMate initial design always favored speed over memory consumption. This can be a problem for applications with large images, particularly for the detection of spots. For instance, when the LoG detector processes a single frame, it first copies it to a float image, then takes its complex FFT. This has a major impact when working with large images and using multithreading to process several frames at once.

To deal with this TrackMate now ships a Block LoG detector. It is identical to the LoG detector, except that it splits the image in smaller XY blocks and processes them independently. If you process each of this block sequentially, you can drastically reduce memory usage. 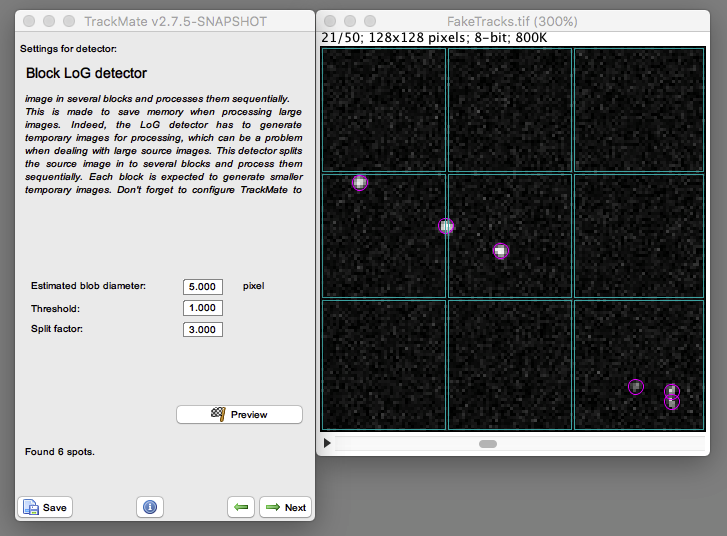 Of course there is a price to pay: Spots that are present exactly on the block borders might be detected twice on two different blocks. This will have a very detrimental effect on the subsequent tracking step. To temper this problem, this detector prunes spots that are found inside other spots.

Also, you will save memory only if you process blocks sequentially. If you fire several threads at once, several blocks will be processed simultaneously, and each will consume some memory. So you need to tell TrackMate to use only 1 thread for processing, which is now possible.

To configure how many threads TrackMate can use, Go the the Edit › Options › Memory & Threads… menu item.

If you need to capture spot images with a larger radius than what the spots have, set the display radius ratio. This is very useful when you need to inspect a larger spatial context around spots. 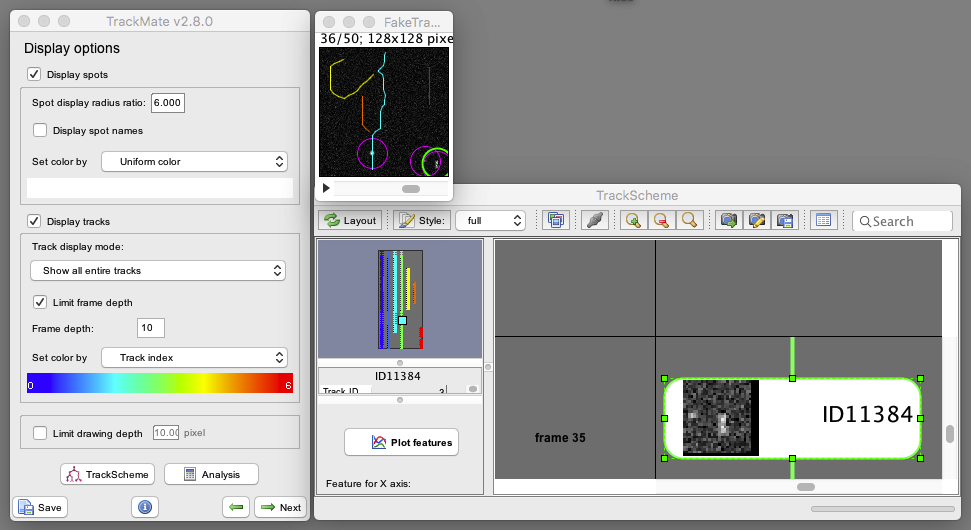 It also acknowledges the display radius factor, and can generate multi-channel output when the source image has several channels. Also, if you just select one spot, it will generate the track stack for the whole track this spot belongs to.

A new action to prune filtered out data.

TrackMate keeps the tracks and spots that have been marked as invisible by filtering. This can generate large XML files and memory usage, even when the useful data is small.

There is now an action called Trim non-visible data that actually discards the filtered-out data from memory.

The Quality value reported by the LoG detector is now sensible.

By contract, all detectors must generate a quality value for each spot they found, that reflects how confident we are that this spot is not a spurious one. Quality is expected to be a positive number, large for ‘good’ spots, small for probably spurious spots.

Though the absolute value does not matter, the one reported by the LoG detector had several drawbacks. It could arbitrarily very large or very small depending on the physical spot size, and depended on the physical calibration of the source image.

Now, the quality value returned by the LoG detector is such that:

There was a bug that caused the sub-pixel localization to display a strong bias on the Y and Z coordinates for 3D data. It affected 2D data, though in a less marked manner.

This bug is now fixed in imglib2-algorithm-0.3.3. The bias is now gone, and you should see a marked improvement on the localization accuracy.

This bug was discovered by both Leanna Owen and Jan Eglinger, and was discussed in part here.

Fix the huge delay when manually adding a spot to large models.

When manually editing large models with many spots, just adding a single spot could take ages. This was due to a bug that triggered spot feature recalculation for the whole model. The bug is now fixed and editing even a large model is now considerably more responsive.

This bug was first reported by Anna Gilles though many may have feel the pain.

The median filter was crashing TrackMate for 3D images.