As announced in the forum here and here, bigdataviewer playground aims at a better integration of BigDataViewer into Fiji by using the SciJava Framework.

How to open images in bigdataviewer-playground ?

Several options are available. Note that there’s a difference between opening and visualising an image. Images opened in bigdataviewer-playground are not visualized directly, but are sorted into a hierarchical tree displayed into an extra window. From this tree, images can be displayed using the right click contextual menu (see next section).

Files (which can even be multi series) can be opened via the command [Plugins>BigDataViewer>Playground>BDVDataset>Open [BioFormats Bdv Bridge (Basic)]. Many files can be opened at the same time. To avoid going through all the hierarchy of Fiji’s menu, you can directly type bridge into Fiji’s search bar and click run.

A BigDataViewer dataset is an xml file which links to raw data and which contains additional metadata (positions, voxel size, channel descriptions etc.). These datasets can be generated by other BigDataViewer plugins such as BigStitcher, and bigdataviewer playground also provides a way to generate an xml bdv dataset.

How to visualize images in bigdataviewer-playground ?

After one or several images have been opened in bigdataviewer playground, a window shows up which sorts the accessible images into a tree view: 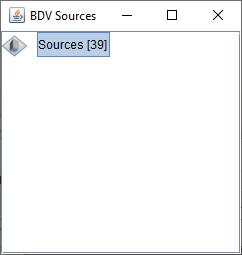 The root node, always named Sources contains in brackets the number of accessible images contained in bigdataviewer-playground. This root node can be double clicked to be expanded and reveal its hierarchy: 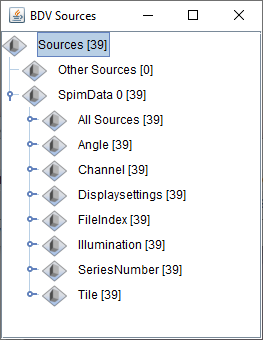